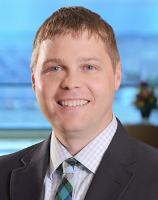 Cullen has given numerous presentations and published articles on various employment and education law topics, including authoring a revised chapter for the National School Boards Association Council of School Attorneys’ publication – Religion and the Public Schools: Striking a Constitutional Balance (3d ed).  Prior to joining Anderson, Coe & King, Cullen was a staff attorney for the National School Boards Association and an associate with the Thrun Law Firm in East Lansing, Michigan where he represented hundreds of public schools and colleges throughout Michigan.

Anderson, Coe & King’s roots in the Baltimore legal community extend to back to 1866, when, shortly after leaving the Union Army, Pennsylvanian Samuel D. Schmucker moved to Baltimore to launch his legal career. Along with George Whitelock, a Baltimore native, he formed the law firm Schmucker & Whitelock. The pair built a thriving, prosperous practice known for its innovative approach to litigation.

Near the turn of the century, the firm changed its name to Whitelock, Deming & Kemp after Mr. Schmucker was elevated to the Maryland Court of Appeals. Following Mr. Whitelock’s death in 1920, the remaining partners, Mr. Deming and Mr. Kemp, merged with Keech, Wright & Carman, creating the firm of Keech, Deming, Kemp & Carman. As was the custom in earlier years, the firm continued to change its name as new partners came aboard and others retired or passed away. Since 1964, however, the firm has been known as Anderson, Coe & King.

Though the firm has always been modest in size, it has left a decidedly large imprint on Maryland law, leading the State’s trial bar for more than a century. Over the years, the firm’s lawyers have participated in over 500 reported opinions and handled many high-profile cases for national clients, several of which have been with the firm for over a century.